The year was 1616. The Dutch and the English were bringing home shiploads of goods from the mystical lands of the east. News of India’s riches had spread like wildfire in Europe and everyone wanted to get on the next ship to this golden land.

So, by order of the King of Denmark and Norway, admiral Ove Gjedde did just that. The journey however, turned out to be a two-year long nightmare, killing half his men. Eventually in 1618, what remained of the fleet, reached the island of Ceylon (Sri Lanka). But things were not going to get any better. The Portuguese were there first and were quite mad at the new competition. The Danes were kicked out lock stock and barrel after another two years of hell.

The admiral found himself at sea, quite literally, sailing this time, to mainland India. A scout ship headed by Robert Crappe had been sent ahead a month earlier to test the waters and look for a safe place to land. But even Crappe met with a disastrous fate after he sailed too close to India’s South Eastern Coromandel coast and encountered a mean Portuguese vessel. His ship was sunk at sea near Kariakal and most of the crew were killed. Two of their heads were set on spikes on the beach as a warning to any other Danes dreaming of making port there. Crappe and 13 of the crew escaped and swam to shore further north of where their poor comrades had lost their heads. Here, they were pounced upon by the locals, made prisoner and taken to their king, the Nayak of Tanjore. Talk about falling from the fire into the frying pan. 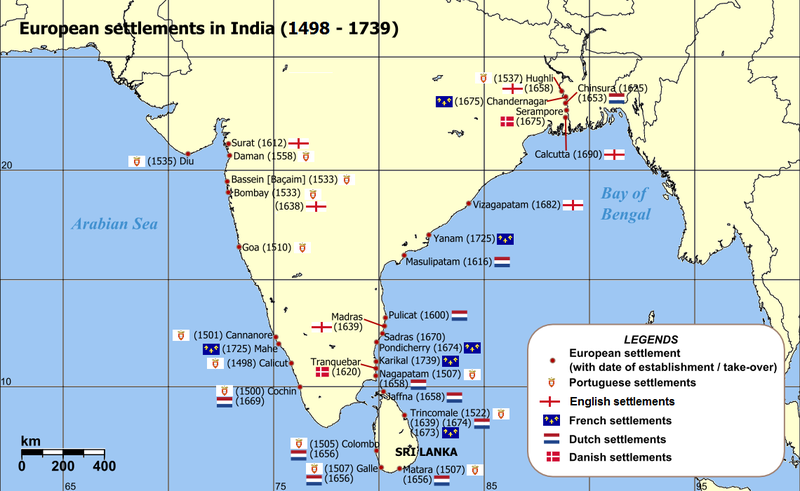 Above: European Colonies in India showing Kariakal where Rober Crappe escaped being beheaded by the Portuguese and Tranquebar (further north) where he met the Nayak of Tanjore. Image Credit: Luis wiki [CC BY-SA 2.5]

Thankfully, the Nayak didn’t want their heads. In fact, he wanted to fulfil their dreams by trading with them. Crappe sent word to the admiral informing him about the safe place to make port. Finally, the admiral had steady ground to stand on and on 20th November, 1618, he signed a treaty with the Nayak of Tanjore and established the Danish East India Company. The treaty granted the Danes the right to collect revenues from the village of Tharangambadi and use of its surrounding areas at a nominal rent of ₹3111 a year. The first order of business of course was to be able to pronounce Tharangambadi which was promptly renamed Tranquebar. The treaty also granted the Danes the right to build what they referred to as a Stone House. 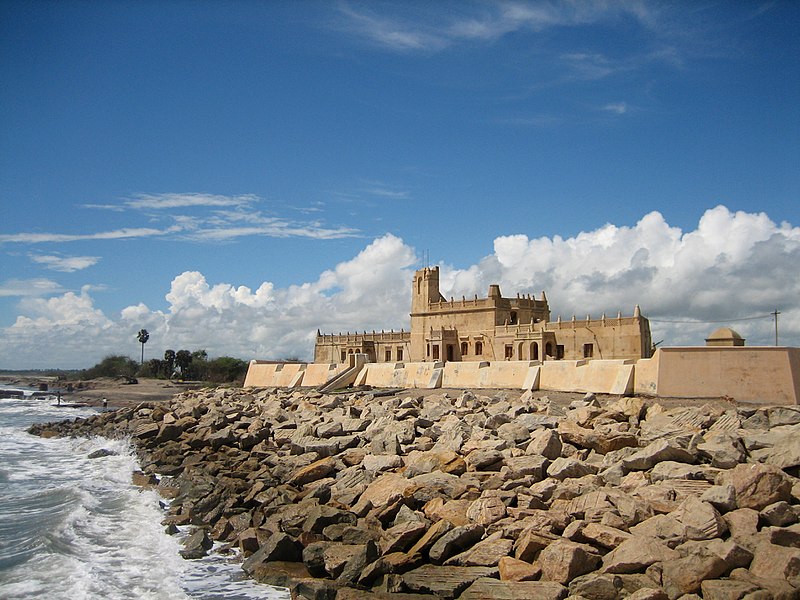 Above: The stone house, Fort Dansborg at Tranquebar in India, built by Ove Gjedde in 1620 Image Credit: I, Eagersnap [CC BY-SA 3.0]

This modest sounding house when built would be called Fort Dansborg and become the second largest Danish Fort in its time. The Danes conducted their business from here for almost 200 years. While they never achieved phenomenal monopolies like the Portuguese or the English, they survived through all the turmoil between the other colonizers. They actually did what other colonizers came claiming to do: pure business without the nonsense of politics. In fact, their political stand was so neutral that when the French, the Dutch and the British were finding ways to steal each others’ colonies, they let Danish ships pass through freely, even using them as couriers to continue their own import-export business.

The British however were not very happy about business going on as usual for their enemies and so in 1801 and 1807 they attacked Copenhagen, destroying the city and the entire Danish Fleet! This dealt the deathblow to the Danish East India Company’s trade with India and things only became worse from there on. The Danes after the attack could not stay neutral anymore and joined the French against the English in the Napoleonic Wars which lasted till 1815. By 1845 trade with India for the Danes which had truly survived all odds for two centuries, became a sinking ship without a fleet. They cut their losses and sold all their Indian Colonies including Tranquebar to the British.

Today Tranquebar has been given back its old name: Tharangambadi, but the port lost its significance as soon as the Danes left. They however never forgot their first safe haven in India. In 2002 four Danish friends set up the Danish Tranquebar Association to restore the fort and its surrounding structures. Today over 200 volunteers are a part of the association, putting Tranquebar on the map again, slowly waking it up from its designation as a sleepy fishing village.

To hear other tales from the annals of history, join us on one of our walking tours.

Main Image: A view of the Danish colony of Tranquebar circa 1658.  Credit: Skokloster Castle [Public domain]