Bengal is perhaps the sweetest Indian State. Bengal’s confectioners offer Mouchaks, Kheer-kadams, Labong-latikas, Longchas, Chumchums, Sondesh and a zillion other sweets till sugar pours out of your ears! And, who but the Bengalis, could have invented that divine sweet called Rossogulla? The Bengalis said exactly that, when they applied for the GI* Tag for Rossogulla in 2015. That’s when the gentle people of the neighbouring state of Odisha, exploded! “What nonsense,” they said, “we invented and you copied!”. And thus, began a bitter battle (or should we say sweet battle?).

* A GI Tag or Geographical Indication Tag is like a Brand or Intellectual Property Right recognised by the World Trade Organisation (WTO): it certifies that an item has certain unique local characteristics. This protects a customer from misleading information; and helps producers command a premium price. For example, you cannot produce sparkling wine in China and call it Champagne. Sparkling Wine from the Champagne district of France is a combination of soil, climate, elevation and process that is unique to Champagne, hence the GI Tag.

The Bengalis produced evidence to show that confectioner Nobin Chandra Das produced Rossogullas in 1866. Good Chhena (native cottage cheese) was the crux of producing tasty Rossogulla and the Bengalis had “evolved” it, thanks to the influence of Persian invaders and Portuguese colonists. Before Nobin, some other Bengalis had produced variations like Gopal-Golla, Jatin-Golla, etc. But Nobin Chandra Das had perfected the technique of consistently producing the classic Rossogulla. By 1930, Nobin’s son, KC Das had a process for preserving and packing them in vacuum sealed tins, and they became a rage all over. And just where did the Odiyas figure in all this, asked the Bengalis.

The Odisha case was, that 800 years ago a priest in Puri Temple sympathised with Pahala village farmers who couldn’t preserve milk. He found a way of making cottage cheese from spoilt(curdled) milk and this gave rise to Rossogulla. The grateful farmers traditionally offer “Pahala” Rossogullas to the Puri temple during the Bachanika festival even now. Odisha furnished 300year-old temple documents and said that Bengalis must have learnt from Odiya immigrants. Nobin Chandra Das was not even born then!

Now the Bengalis accused the Odiyas of bluffing. What was Rossogulla, but spoilt (curdled) milk? Which faithful Hindu would offer spoilt things to the Gods?

The WTO finally awarded the GI Tag to the Bengalis in 2017— calling it “Banglar Rossogulla” or the Bengali Rossogulla. The Chief Minister of Bengal tweeted it as a victory for the State. Meanwhile the Odisha Chief Minister received angry messages on  social media, accusing him of sleeping while  Odisha’s heritage was being usurped.

In a rear-guard action, the Odisha government made a counter-claim: “Odisha Rossogulla is very soft to feel, juicy and non-chewy in consistency and can be swallowed without teeth pressure. The Rossogulla prepared in other places (a dismissive way of referring to Bengal!) is circular in shape, milk white in colour and basically spongy and chewy in consistency.” The WTO swallowed this (the idea, not the sweet) and awarded a separate GI Tag for “Odisha Rasagola” or the Rossogulla of Odisha! 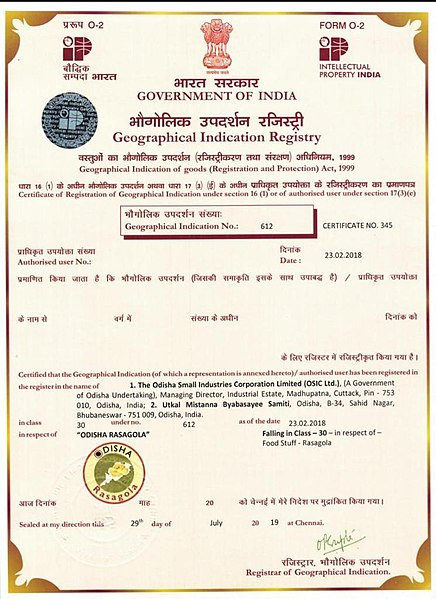 Above: The GI Tag certificate for Odisha’s Rasagola. Image Credit: Government of Odisha [CC BY 4.0]

Both sides claimed victory, and Rossogulla day is now celebrated on 14th November in Bengal and 30th July in Odisha! Two more excuses for all Indians to gobble Rossogollas!

For a taste of this delightful sugary ball and other delicacies that India has made her own, join us on the Food Trail in Chennai, Madurai and Pondicherry.