The modern game of Polo is played in at least 77 countries including India, Argentina, the USA and the UK. It was even part of the Olympics between 1900 and 1936. But where did it all start?

The very first Polo tournaments were played in Persia or modern-day Iran by tribal nomads. The warlike tribesmen played the game with as many as 100 players to a side. It was a miniature practice battle that was way more brutal than the tame version played today. Later, the game was used to train elite cavalry units, like the king’s guard. In time though, it became a Persian national game, popular with the nobility. Both men and women enjoyed the sport. 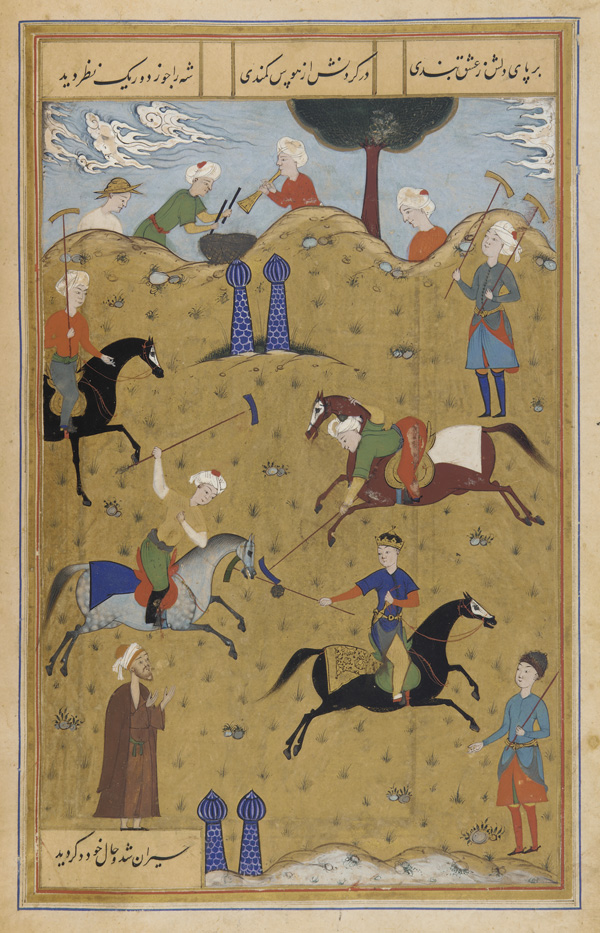 Above: A Persian illustration from the Manuscript of the Guy u Chawgan (The Ball and the Polo Stick) of `Arifi 1523. Image Credit: Arifi (d.1449) [Public domain]

Then in the 13th century Muslim conquerors from Persia started making forays into the Indian subcontinent and setting up sultanates. They brought the game with them. When the first Mughal emperor, Babur, also from Persia, set up the Mughal Empire in India in the 15th century, the game became quite famous. Other Indian kings were fascinated by the game and started adopting it as a royal sport. Soon Polo or Chaugan bazi as it was known in those days, became a traditional outdoor game popular in Indian royal families and remained so well into the 18th century. As the years went by, the game evolved and spread to different parts of the country.

By the mid-18th century, the power of the Mughals came to an end and the British East India Company took over. In the 1850s, a group of soldiers from the Company joined some British tea planters, on their travels to Silchar in present-day Assam in North Eastern India. While on their excursion, they came upon a curious sight.

Teams of men, wearing turbans, and shin-guards, were mounted on muscular ponies, riding about, charging at each other, wielding mallets. The centre of all the attention appeared to be a hockey ball! Were these men trying to play hockey on horseback? The British were beyond intrigued. It did look like a lot of fun too.

The men playing the game turned out to be exiled princes from the neighbouring kingdom of Manipur (today an Indian state). The people of Manipur have their own origin story for Polo. Legend has it, that it was the Gods who invented and played the first game of Polo or Sagol Kangjei as it was known there. Iboudhou Marjing, the God of horses  is said to have made the first rules of the game. Then apparently in 33 AD deity-king Nongda Pakhangba organised earth’s first polo match. 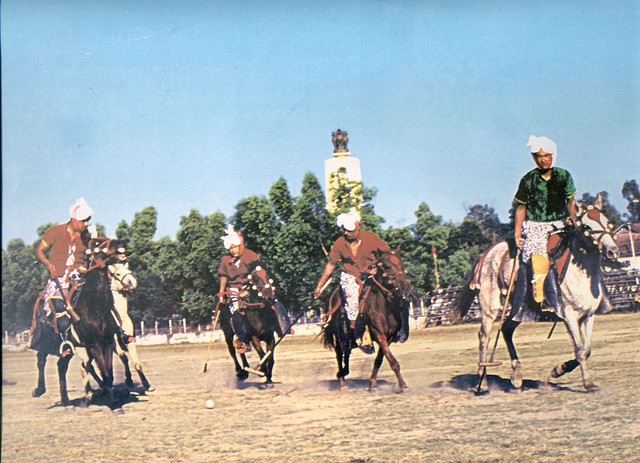 Above: The traditional Manipuri Polo, Sagol Kangjei, on which the modern game of Polo is thought to have been modelled in British India. Image Credit: Kishalaya Namaran [CC BY 2.0]

But whether the game came from the Gods or the tribal nomads of present-day Iran, the British were hooked. They made the game their own  and formed the first European polo club in 1859 at Silchar.  Soon after, The Calcutta Polo Club was formed in the early 1860s by officers of the British army. It became a popular game amongst the colonists and spread rapidly to England and from there to the world as we know it now. Somewhere along the line some people in present day Nepal, decided to try playing the game using slow elephants instead of swift horses. It was apparently quite a success. This rare alternative is still occasionally played in Nepal, Thailand and the state of Rajasthan in Western India.

Above: A game of Elephant Polo in progress. Image Credit: Krish Dulal at ne.wikipedia [CC BY-SA 3.0]

Today the World Polo Championship is held every three years by the Federation of International Polo which was formed in 1982 in Argentina. This South American country hosts the world’s most important Polo tournaments. Quite a long way to travel wouldn’t you say from Persia or North Eastern India?

For more such stories join us on one of our trails in Mumbai (to book, write to mumbai@storytrails.in or call +919152021278), Chennai, Pondicherry, Madurai and Trivandrum.

Download the Storytrails App to discover a city all by yourself with our location aware Audio Tours.

This group of young entrepreneurs joined us early on a Saturday morning for ‘Stories On The Run’, a running trail by the sea. We jogged along the Marina taking in views of the beach at dawn, and admiring the majestic colonial-era buildings dotting the coastline. And we talked about the British and all that they left behind in Madras - the very first city they established in India. #Madras #Chennai #HiddenHistories #Storytrails #MarinaBeach #WalkingTours #Heritage #History #StoriesOnTheRun #heritageTours #instatravel #exploreindia #India
One hundred thousand lamps, winking and flickering, will light up the Padmanabhaswamy temple today. It is the grand finale of the Murajapam, a 56 day long festival which involves over 200 priests continually chanting the vedas. This festival, held once every 6 years, has been documented from as far back as 1747. The city of Trivandrum owes its very existence to this ancient temple at its centre. Join us on the Kingdom of Gods trail in Trivandrum, as we walk through the bylanes around the Padmanabhaswamy temple, arguably the richest temple in the world. PC: Lakshmy Vallabhan @lakshmy.vj #WalkingTours #Storytrails #Chennai #Madurai #Pondicherry #Mumbai #Trivandrum #Thiruvananthapuram #KingdomOfGodsTrail #PadmanabhaSwamyTemple #IncredibleIndia #Murajapam #heritageTours #instatravel #exploreindia #India
He who must not be named shall not be named. But apparently he loves samosas and ginger chutney. #Chennai #Pondicherry #Walkingtours #Foodtours #storytrails
What do you take back from a holiday? A drive full of photographs? A few likes on your travel posts, perhaps? In a time when travel experiences are made to be instantly shared, here’s one person recording her travels the-old school way; not with a camera, but with pencils, paints and a sketch book. Like travellers from a bygone era, she draws all the things that catch her eye. Pam is from Australia and she joined us on our trails in Pondicherry and Chennai. We caught a glimpse of her beautiful travel journal, and coming soon, she tells us, are pages dedicated to her tours with us. What a lovely way to remember and reflect on your experience! #Storytrails #Walkingtours #Chennai #Pondicherry #Madurai #Trivandrum #Mumbai #FrenchConnectionsTrail #PeacockTrail #heritageTours #instatravel #exploreindia #India
%d bloggers like this: